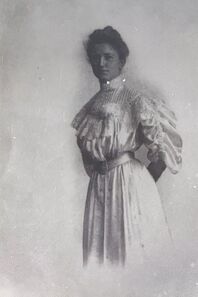 Helen McCune
The Art Study Club offered its members an imaginative outlet to explore different modes and themes of art and culture while fostering bonds of community and friendship between the club’s female members. The club was dedicated to teaching its members about all ranges of art and inspiring the women whether it be through classical art, renaissance age, modern age murals, or even literature. The club was one of the oldest in Petoskey and had established itself as a force with devoted members but also connecting with the community and advocating for the children of Petoskey. Each study hour was dedicated to a new lesson to improve the women’s understanding and interpretation of various subjects. The organizer and original president of the club was Mrs. W. J. McCune. The honor of being the club president was later held by Mrs. Jessie Petersen at the time of the club's twenty-fifth anniversary luncheon in 1921. At the time of the luncheon the club held twenty-six active members, according to the Petoskey Evening News. The club held a large presence in the Petoskey community and made a significant impact in the lives of women across its many years of activity. 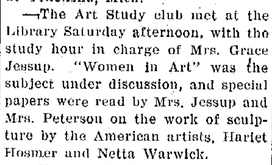 Petoskey Evening News, January 10, 1910
The Art Study Club, in true women’s club fashion, showed their advocacy for women in 1910 by spending time focused on “Women in Art.” One particular Saturday afternoon in the library, Mrs. Grace Jessup led the study hour where Mrs. Jessup and Mrs. Peterson read papers studying two female sculpture artists named Hariet Hosmer and Netta Warwick. The club also spent time dedicated to individual artists such as Childe Hassan, H. O. Turner, E. C. Tarbell, and one particular artist who was close to home, Carl Melchers. Melchers was originally a Detroit based artist who had a studio in Paris. One of his first murals was able to be seen on the walls of University Hall in Ann Arbor, according the Petoskey Evening News. The Art Study Club was an educational force that was enlightening and allowed members to step out of their own world and into a bright new world that reached beyond Petoskey and explored the murals of Detroit and the art studios of Paris. ​ 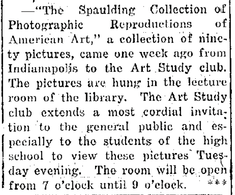 Petoskey Evening News, Jan. 12, 1920
The club did not just focus on works of art however and included great works of literature. In November of 1913, the club held an open meeting where the superintendent Hartwell joined the meeting and spoke of Mark Twain. Superintendent Hartwell selected readings from Twain to enlighten guests about the author’s masterpieces. While the club generally studied new subjects at each meeting, in 1914, the club was in the midst of a two year course on Italian art. In November of 1914 during their running course on Italian art, the club read and studied a poem by Browning about Andrae Del Sarto, an Italian painter, fitting the theme of their study on Italian art. Art was not just limited to paintings or sculptures but also works of poetry and literature and the creative use of language that entices people.
The Art Study Club was not confined to their study sessions but rather also participated in community functions and engaged with other clubs in Petoskey. The club was a vocal advocate for increasing the quality of art hung up in schools for children to see. They also advocated for a higher class of films to be shown in theaters on the weekend, when kids are more likely to go to the movies. The club also collaborated with the Shakespeare Club, one of the other oldest clubs in Petoskey, to put on a community event and create a Shakespeare exhibit in the children’s room in the library. The exhibit was open to guests Saturday afternoon and Sunday afternoon in May of 1916, and visitors abundantly flowed in. As described in the Petoskey Evening News, among the displays donated by people in the Petoskey community and members of the clubs, included pictures of actors who have held roles in Shakespeare’s phenomenal plays, editions of Shakespeare’s works, busts of the author, a Latin Bible containing the Apocrypha dating back to 1602, as well as a charcoal sketch of the Globe Theater. The exhibit even included a copy of Shakespeare’s will which was read much to the excitement of visitors. The event was a grand success for the Art Study Club and a great way to interact with their Petoskey neighbors and share some of their knowledge. The Art Study Club inspired creativity and provided a space for women to embrace their passion and deepen their understanding of art and culture, while creating lasting bonds with like-minded women. 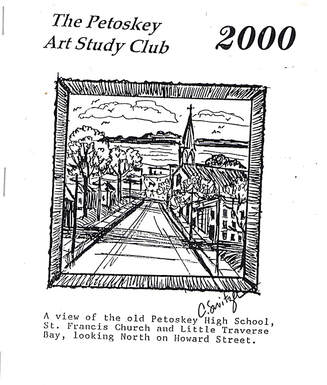 Art Study Club program, with cover illustration by Carolyn Switzer
One of the longest running women's clubs in Petoskey, the Art Study Club met from 1896 to 2005.