Researched and written by Char Nieberding, 2022 intern
In 1917, Ms. Mary Dalm started working at the then fourteen year old Sheridan School, and began keeping a journal about a year later. The documentation of her daily life offers a great deal of information about the experiences of students and teachers alike, and much of her writings focus on her role as a member of her community during the end of the first World War. She additionally describes how the war affects the students and school itself. Through this, we gain insight as to how schools operated during this important moment in American history, and understand the role of teachers in times of crisis.
Ms. Dalm was a young woman in 1918, and the majority of her social network were other young, female teachers, who she refers to as “the girls.” Often, Dalm and her friends volunteer with the Club of ‘17, which she describes as, “a club of seventeen girls which was organized in Nov. 1917 for the purpose of a sociable time and also to do some Red Cross work.” They do things like send flowers to new widows, sew clothing for war orphans overseas, send postcards to soldiers, and hold local benefits. Dalm is very involved in the group, as she has personal connections to a few men away at war and wants to help with the effort as much as possible. Two of the men she mentions are Jake and Jim. Jake is already deployed in France, and she has limited correspondence with him. She sends him letters and boxes of various goods, and is even able to briefly visit him while he’s on furlough. Meanwhile, Jim lives near her in Petoskey, and the two have a romance together. They are eventually engaged, but plan not to marry until after the war, as Jim plans on enlisting. After he leaves, Dalm writes, “I received a nice fat letter from Jim today – Also one Wednesday. He certainly has a bad case of “loveyitis.”” Throughout her journal, Dalm writes about missing Jim and wanting to be with him again - thankfully, she can do so once the war is over.
Dalm must juggle her personal life, volunteer work, and her career simultaneously. She is often worried about what’s going on in the war, one time describing her concern for a group of 300 American soldiers caught by Germans. She writes, “Why it just gave me the queerest feeling. It’s too bad to be caught like rats in a trap… Well I have had a happy day in school at least” and goes on to describe the school day. Dalm is trying to teach while also dealing with her personal concerns. To do so, she involves her students with activities related to the war. For example, at school concerts, children dress in soldiers’ costumes and sing war songs and some students are involved in a “Junior Red Cross” she and other teachers are establishing. 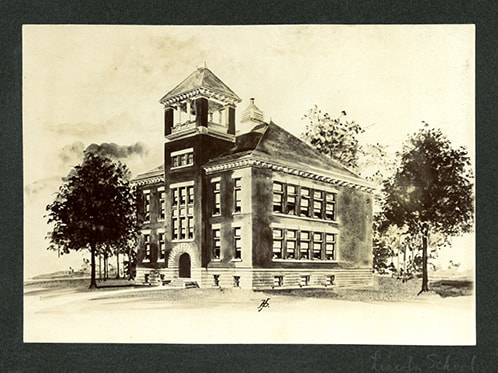 Sheridan School around 1917
Still, even beyond the emotional labor that comes with teaching during wartimes, Dalm struggles with maintaining her career. She describes the increasing costs of living and explains that she and some other teachers are considering leaving the Sheridan School unless they receive a raise. Thankfully, she ultimately receives a raise of $50 and stays. However, this is not the end of the problems - Dalm explains that there is a coal shortage and many schools are shut down because they cannot keep their buildings warm. Dalm writes, “One of the little youngsters, Albert Tellner, cried pitifully this morning, his hands were so cold. I think I froze my left ear again. This is the third time within the month.” The Sheridan School is only able to stay open because it receives a donation of coal they could otherwise not afford.

Education in the Petoskey area has changed much over the years, but one fact has remained the same: it cannot exist without teachers. In the late 1800s, a great deal of thought was put into the question of who teaches what, where. How teachers were hired and retained was integral in the upkeep of historical schools, which were often small, community led institutions relying on just a few key actors.
In Bear Creek, the first schoolhouse was established in 1876. That same year, while the local board of education was assigning members, gathering materials, and deciding where the building would be placed, one of the first decisions made was to hire teachers as soon as possible. When hiring teachers, the board debated amongst themselves what gender of teachers they would look for, what season of school (winter or summer) those teachers would be responsible for, and how much they would be paid.
From 1876 until 1900, the board of education in Bear Creek voted for female teachers 4 times, male teachers 5 times, and 5 times they voted that either gender would be accepted. Over the years, teachers’ wages ranged between $55 - $175, but were usually close to $150.
Similarly, the process of hiring teachers was listed in a newspaper article from The Traverse Region in 1884. According to the paper, the qualifications for teaching were held at an especially high standard, resulting in excellent performance at local schools - both by teachers and students alike. It was estimated that within the district, there were 20 teachers who made teaching their permanent professions, and those teachers were active in a “Teachers’ Association” in which they met and discussed how to improve the schools. It was recently established that schools would now be under the supervision of a superintendent, and thus teachers were situated within a collection of other education workers. This interaction between teachers and the education system was integral for the closely interwoven networks of the time.
Like previously mentioned, schools during the 1800s were small and led locally. It was vital that community leadership found people they could trust to work in each schoolhouse, and that can be seen through the processes used to hire and retain their teachers. Beyond that, the work the teachers did speaks for itself - the legacy of hard work and high standards remains today.