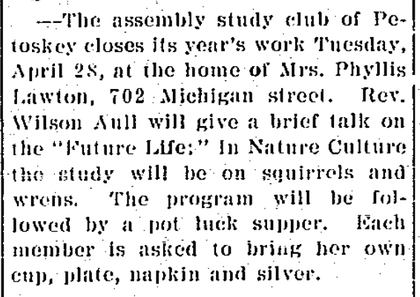 Petoskey Evening News April 25, 1908
The Assembly Study Club provided resources and the space for women to further their education while also engaging with aspirational women from the Petoskey community. The club covered a vast array of material, allowing the women to advance their knowledge in many different topics and areas. The Assembly Study Club was special in that, amongst the other women’s clubs in the area, it was the only club that had unlimited membership. In order to become a member of the club there was a 25 cent fee upon admission, with the understanding that those admitted would complete any work the club assigned during their meetings. According to the Petoskey Evening News, a local newspaper, the club was also the first women’s club to hold its meetings in the club room of the Petoskey Public Library.


​The Assembly Study Club had a structure to their meetings. The first half of each meeting was dedicated to Bible study, while the second half of the meetings was dedicated to their learning of different subjects. As noted in a Petoskey Evening News article in November of 1909, Bible study was led by Mrs. Jessie Grosenbaugh. The subjects covered in the second half of each meeting were complex and very different depending on the year. In the same article in November of 1909, it was published that the club was studying astronomy. In April of 1909, Miss Fannie Pailthorp presented the world’s twelve greatest pictures for the club to study. However, the previous year in April of 1908, the club hosted a nature talk where they focused on squirrels and wrens. Showing the diversity in what the club studied, the Petoskey Evening News in April of 1908, published the subjects of study that the club would be focusing on for the upcoming year. As noted in the article, the club would be studying “Paul and His Ills”, “Greek and Italian Masterpieces”, and “Mythology and Christian Legendary Lore.” From astronomy, to nature talks, to “Greek and Italian Masterpieces”,  the club studied a vast assortment of academia to advance the knowledge of the women of Petoskey. ​ 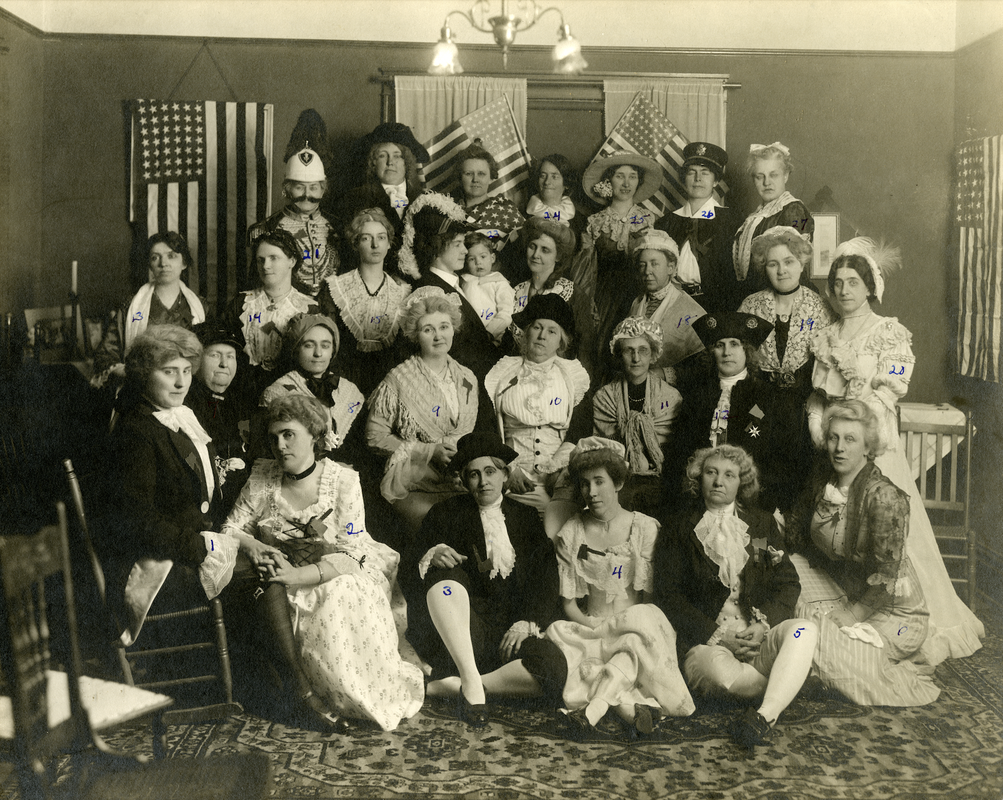 Assembly Study Club Washington's Birthday Party
The club was not limited to their studies however. They engaged with the surrounding community and attempted to share light and positivity with their Petoskey neighbors. In 1909, Mrs. G. S. Barnes, who was associated with the Assembly Study Club, suggested doing a spring clean up in order to give the town a more inviting and welcoming appeal for those returning for the summer, while at a June meeting of the Federation of Women’s Clubs. The club had a profound impact on its members and was important for the advancement of women’s rights in providing women a chance to continue their education. The Assembly Study Club offered the women of Petoskey an opportunity to further their education in a safe space while also creating meaningful relationships with their neighbors and members of the community. ​